People With Early onset Alzheimer’s Describe What Life Is Like 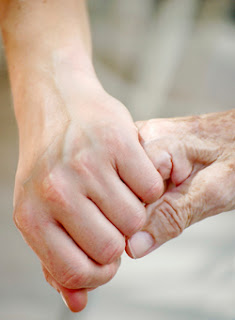 I found this story on PBS today and wanted to share it.  Susan Dentzer reports on early onset Alzheimer’s, a degenerative brain disease, and how a forum organized by those suffering from the diagnosis has proven an effective means of coping.

SUSAN DENTZER, NewsHour Health Correspondent: Richard Bozanich and Jay Smith spent months planning and preparing. On the big day here in Los Angeles, Bill Bridgwater flew in from Colorado. James Smith and his wife, Juanita, came from Minnesota. And Carol Kirsch and her hud, Howard, drove in from ther aging baby boomers present, you might have thought this gathering was about prepring for retirement, launching a second career,acation home. But iasn’t.

FORUM SPEAKER: This is the largest gathering of people with dementia in one room in our country.

SUSAN DENTZER: In fact, what was billed as the Early Memory Loss Forum was one of the nation’s first-ever gatherings of baby boomers with early-onset Alzheimer’s disease, organized and led by these Alzheimer’s sufferers themselves.

Bozanich, who’s 49, welcomed the crowd on behalf of himself and co-organizer, Jay Smith.

RICHARD BOZANICH: Our motto has always been that this day was by and for persons with early memory loss. So for those of you who are traveling the same road as the two of us, this day is for you.

SUSAN DENTZER: It isn’t known how many Americans have the early-onset form of Alzheimer’s, but estimates range anywhere from 250,000 to 500,000. The cause isn’t fully understood, either, although several genetic mutations are implicated in some cases.

Meanwhile, it’s estimated that 5.1 million Americans now suffer from all forms of the disease, including the type that typically hits people 65 and older. With the population aging, the number of sufferers with all forms of Alzheimer’s could more than triple over the next 40 years.

We wanted to know more about what it’s like to be struck by Alzheimer’s in the prime of life, so we sat down for a conversation with this group, all suffering from early-onset Alzheimer’s. All have worked with the National Alzheimer’s Association and are among the nation’s most vocal spokespersons for the urgency of fighting the disease.

BILL BRIDGWATER: Prior to the onset of my Alzheimer’s at age 48, I was an information technology executive, and I had held senior-level positions at numerous multibillion-dollar companies.

RICHARD BOZANICH: I was managing editor of Daily Variety, which is an entertainment trade publication.

JAMES SMITH: I was an information technology director for a Fortune 100 company, a global company. I referred to it as our charmed little life, because everything just seemed to be firing on all cylinders.

SUSAN DENTZER: Each described how these seemingly charmed lives were suddenly interrupted by a bizarre range of symptoms, as Alzheimer’s, a degenerative brain disease, progressively killed neurons in different parts of the brain.As they lunched at the conference, they recalled how they’d sometimes exhibit the classic signs of memory loss, but often the symptoms were altogether different. Work colleagues were among the first to notice.

JAMES SMITH: People would ask me, they would say, “Well, why weren’t you at the meeting?” And I said, “Well, there was no meeting that I’m aware of.” And they said, “Well, you called the meeting. You should be aware of it.”

BILL BRIDGWATER: One of the things that was just driving me to distraction was insomnia. I could not sleep at night. I would get up and do 50 push-ups, 50 sit-ups, 50 leg kicks with each leg, and do everything I could to just drain myself. I laugh and tell people that I didn’t get much sleep, but I was in the best shape of my life.

CHUCK JACKSON: My arm would be sitting here and suddenly it would just shoot up and hit me in the head almost. And my legs would kick.

RICHARD BOZANICH: I was just bumping into walls and bumping into partitions. And, you know, you see a wall in front of you, and the obvious thing is to either go left or right, and I would just walk straight into the wall as if it weren’t there.

SUSAN DENTZER: The group told us about dozens of visits to doctors who handed out conflicting diagnoses. Jay Smith, a successful architect who is not related to James Smith, had helped design courts and other facilities for California’s justice system.JAY SMITH, Alzheimer’s Sufferer: I thought I had a brain tumor, so I went to the neurologist, and I didn’t have a brain tumor. He said he thought I had a benign condition called migraine that doesn’t always cause headaches.

JAMES SMITH: For me, the initial diagnosis was depression. Then they shifted over and thought, well, maybe it’s a movement disorder, like MS or something like that. And for a while, they were thinking it might be Huntington’s disease.

SUSAN DENTZER: Most of the group told us the correct diagnosis was only arrived at when they finally got a battery of neuropsychological tests and a PET scan of the brain.

But for Chuck Jackson, who most recently worked as a counselor to laid-off workers, the diagnosis was far easier.

CHUCK JACKSON: We’re one of those groups of families that have the highest rate or incidence of Alzheimer’s in their family. I watched my mother go through it when I was — I was 13 at the time. And when she died at the age of 50, I knew what was coming.

SUSAN DENTZER: In fact, out of his mother’s family of 14 children, 12 died of the disease, thanks to inherited mutation in a gene called PSEN2. Now Jackson and his older brother both have Alzheimer’s.

The group members told us that getting the diagnosis prompted a range of reactions.

JAY SMITH: It came as a shock, because I hadn’t thought about Alzheimer’s or memory loss up to that point, and relief to have an answer, “I can now focus on my life knowing what’s wrong.”

CAROL KIRSCH, Alzheimer’s Sufferer: I just refused to believe it. I just said, “No, this can’t be.” I knew enough about it that I was scared. I was scared.

SUSAN DENTZER: James Smith and his wife, Juanita, spoke at the conference about how they reacted after getting the diagnosis.

JAMES SMITH: We would just lay in bed together, and hold each other, and cry, and really not know — it felt like you were in a maze and all the doors just suddenly slammed shut. And there’s just no path that takes you anywhere. I remember it as being one of the — probably one of the darkest periods of our entire life.